“But exhort one another daily while it is called Today; lest any of you be hardened through the deceitfulness of sin.” Hebrews 3:13

I’m becoming more and more convinced that God never intended us to “go it alone” or “go solo” in the Christian life. I know a response to that could 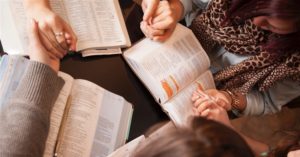 be, “but we’re never alone, God is always with us!” Which is so wonderfully and incredibly true. Yet, God mentions the body of believers so much and in such critical ways, that it seems imperative that we have consistent interaction and fellowship with other believers.

The challenge is, that many of us feel unable to let people into our lives in a meaningful powerful way, and we don’t really know how to encourage or impact other people’s lives either.

Church can sometimes be an all too clear example of this.

We go to church, enjoy seeing our friends and chit-chatting with them about normal life stuff. We enjoy, or don’t enjoy the singing, we take notes on the sermon because it’s so good, or we try to stay awake because it’s so boring, then we get up, exchange a few comments and niceties about the message, say bye to our friends, and then leave…..unless your church does lunch fellowship, then you stay, and continue the chatting about everyday life, sometimes throwing in a tiny little bit of gossip while you’re at it. Going through the ever changing “Who likes who” list, or maybe the “Did you hear what happened in their family?” comment etc.  We may even zero in on sports, or the activities we were involved with during the week.

But, what about the real struggles we’re having? What about our areas of failure where we feel like we’re the “only ones” who can’t seem to get it right? We look around in church, and almost everyone seems to be doing great, and we feel like they must not have the struggles that we do.  Or we see the ones that are obviously rebelling, but we don’t necessarily want to cast our lot in with them. We might see those that we’re pretty sure aren’t doing very well, but they sure aren’t saying anything to anyone. They’re just pretending that they’re like everyone else even though, according to what we’ve heard, they live two lives that don’t look the least bit similar! That’s not necessarily what we want either, so we go on, trying on our own to figure out the Christian life and sometimes, it’s downright discouraging. Many times we feel like giving up. Alone and often defeated, we wonder where God’s joy and power have gotten to, and why this “abundant life” seems more like a stay in the middle of the desert.

Well, as I was thinking about today’s verse, another scripture came to mind along with a picture.
1 Peter 5:8 “Be sober, be vigilant, because your adversary the devil, as a roaring lion, walketh about seeking whom he may devour.”

Being “hardened through the deceitfulness of sin” sure sounds like the work of a spiritual devouring lion to me. But what was interesting was, 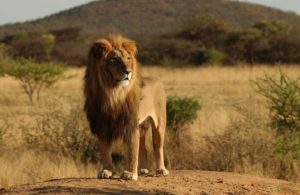 when I started thinking about a lion on the hunt, some fascinating points came to mind. The main point that applies to this verse being: Lions don’t attack herds, they attack stragglers. If they attack a herd it’s usually to get everyone running so they can find a loner and take him down. A lion has very little power against a herd of tightly packed elephants prepared to defend themselves. But if the lion can get one alone and away from the rest of the herd, then he and his lion buddies have a chance!

A zebra running in the middle of the zebra herd is hard for a lion to pick out because all the lion sees are black and white stripes bouncing everywhere, but a lone zebra is much easier to distinguish and then…
the chase is on!

There is safety and protection and power in the presence of others who are like minded and have the same enemy! Again, we aren’t meant to do the Christian life alone! Here’s another illustration. Paul often relates our Christian life to that of a soldier. In 2 Timothy 2:3, He tells Timothy to endure as a good soldier, and in Ephesians 6 he lists out “weapons” that we are to use against the attacks of the enemy.
So using this comparison, imagine the outcome of a war if the method of fighting was to drop one lone soldier at each point of conflict…that would be ridiculous! They’d all get slaughtered!!  But that is exactly what we do when we neglect this command to exhort one another and to be in deep fellowship with each other! We march out on our own and just try to stay alive as we face the onslaught of the enemy. Victory isn’t even a consideration, we’re just hoping that we’ll miraculously survive somehow! That should not be the life of a soldier of Almighty God!

This world is a battlefield between the Truth and love of God and the lies and wickedness of, the would-be usurper, Satan. We are soldiers in this epic battle, and we can’t afford to go into battle alone! We are to fight together with our comrades in the faith, side by side, watching each 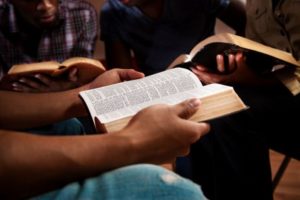 So what does this look like, and how do we do it?

This looks like making it a priority to spend time consistently with other believers who are genuinely seeking Jesus, fighting the good fight and running from sin! (2 Timothy 2:22)

If you can find people like this in your church, awesome! Try to get together with them regularly. Maybe have them over for a meal, or go out to chat about life over coffee. For the guys, maybe go out and play basketball and then grab a burger afterward and have a talk. It’s doing whatever it takes to spend time with others who are serious about seeking Jesus.

But, even if we get together with others, how do we make it meaningful and impactful, instead of “spiritual sounding” and shallow or just a bunch of churchy talk that doesn’t really hit home with the realities we’re facing? (Many of us have possibly been to Bible studies like this.) Here are a few words to keep in mind that, when used in the power of Christ, can help us experience real fellowship.

So, as we seek to be real soldiers, fighting faithfully beside our fellow soldiers in Christ, let’s be intentional about spending consistent time with those who seek Jesus, and by the power of Christ, let’s be the ones who drop the load of pretense and live authentically with humility, grace, truth, and love.