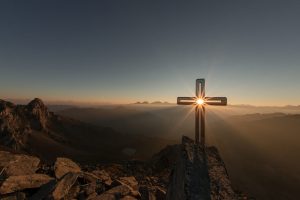 “In whom we have redemption through his blood, the forgiveness of sins, according to the riches of his grace;”

This one little verse packs an incredible wallop. It’s the story of the Gospel in a single sentence. It’s a microcosm of the eternal plan. The simplicity and power of this little thought is legendary.
Sounds far-fetched? Let’s take a look.

“In [Christ] we have Redemption”

This one phrase should be a complete show-stopper for us. Thanks to Christ, we have complete redemption.
The word “redemption” in this passage means:

In other words, Christ paid the ransom for us, the outstanding balance of the debt we racked up, that was bound to result in our own death.

But Jesus payed for what we bought, and paid it in full (“it is finished”) so that the cycle could be broken, and we could get out from under the oppression of our own sin.

He had drawn us OUT.

We could easily skip over this phrase as just an extra bit of info that we could take or leave. But it’s here for a reason, because it gives us a clue into the personality of the God we serve. He gave us His law to show us his nature. We had to play by His rules, but no one could. Which isn’t very surprising. But what is surprising is that when God decided to rescue His people, He decided to play by His own rules. He didn’t have to, He could have made an exception. But He chose to perform His perfect plan in such a way that it fulfilled the law and the prophets, not destroyed them.

Here is a relevant albeit obscure example.

Hebrews 9:22 states: “And almost all things are by the law purged with blood; and without shedding of blood is no remission.”

So, He had to work within this idea of shedding perfect blood. Obviously, He was the only candidate in the “perfect” category, but God is a spirit. Spirits don’t have blood. So to make this work, He would have to become a physical being that could bleed, yet still be perfect. Sound like someone we know?

Jesus was literally the perfect fulfillment of the Law, while in the same moment He released us from the impossible requirement of the Law. He did it all lawfully and legally. He paid for us fair and square.
Satan obviously was furious, but there is nothing he can legally do about it. (except perhaps complain, which I’m sure he does a lot)

Jesus paid for us Lawfully and Legally

“The forgiveness of sins”

This is where it gets really good! Not only did Jesus pay our ransom, but He also forgave us. I think most of us assume that these two are the same thing, but they aren’t. The word forgiveness here means:

“Forgiveness or Pardon for sins.
Letting them go as if they had never been committed (Remission of sins)”

Incidentally, the Greek word for “forgiveness” in this passage is the same word for “remission” in Heb. 9:22 that we just looked at. This kind of forgiveness could only come from the shed blood of the perfect Messiah. I love the idea of Him letting our sins go as if they had never happened.

Let’s put together what we have so far by looking at this another way.

Imagine a prisoner on death row. The prisoner is you. You’re just waiting for your punishment. In this case death. You’re just waiting to die. But then you suddenly get released. Someone paid what was demanded to satisfy justice (in your case, death) and now, since that justice has been met, you are free to go. That’s the first part. That’s pardon. That’s redemption.

And while we should never diminish the magnitude of that transaction, amazingly, that isn’t all there is. God wasn’t finished there.

Because as a newly released prisoner, you are now free to go. But free to go where? Just because you’re free doesn’t make you good. You’re still stuck with you. Where can you go? Back to your old lifestyle? That’s really your only option. But that will only put you back in the same mess you just got out of. You’ve been released, but with nowhere to go but back to prison.

But now imagine that at the same time that you were released from the deeds of your past, you also received a new identity. Not only was your criminal record paid for, but now your criminal record is wiped completely, gone forever. You’re not a criminal anymore. And not only is your past gone, but so is the desire and nature to duplicate it.

Hebrews 10 says that once sin has been forgiven, no other offerings are necessary. There’s no place for the wages of sin to pile up anymore. It’s gone. We are forever free. And with our brand new nature and brand new identity, we are freely welcomed into the most loving and passionate Family in the universe. We went from dirty condemned criminal, to pure, beloved child.

He has brought us IN

“According to the Riches of His Grace”

There is absolutely no good reason we get redemption and forgiveness. But there is one good cause.

If you stop to think about it, this could blow your mind.

Our forgiveness is as constant as Christ is.

At this point, we could try to tackle the great question: “What is grace?” Which we don’t have time for. But simply put, it is the blessing of God. His undeserved favor toward us. And while that is true, it isn’t all of the story. Because His grace is so much more than that.

“In whom we have redemption through his blood, the forgiveness of sins, according to the riches of his grace;”

There you have it. The entire thrust of the grand and glorious gospel in just a single, simple sentence.

We ended last year with celebration and joy and gratitude during what we call the holiday season. And as we look forward and see this new year stretching out before us, let’s keep up the grateful and joyous spirit of the season we just left behind. “Live with Joy, Love deeply, and be Thankful.”

In this next month (and year), let’s get into the simple habit of expressing our gratefulness to our mighty and loving King; the One who so freely gives to us all the riches of His Grace.

← Meditate On What You Have Memorized
He Gives More Grace! →