“Or he that exhorteth, on exhortation: he that giveth, let him do it with simplicity;
he that ruleth, with diligence; he that sheweth mercy, with cheerfulness.”
– Romans 12:8 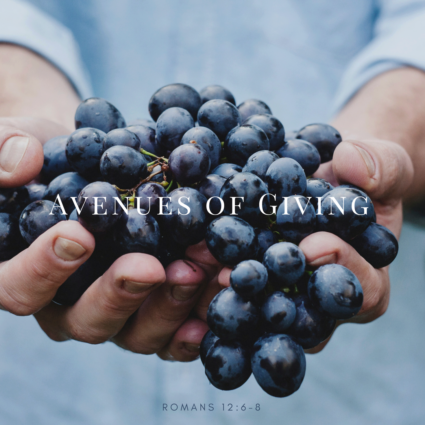 So, what is this verse talking about, exactly? Well, if you’re reading this post, it probably means that you have memorized up to Romans 12:7! This would allow you to see that today’s verse is a continuing thought on spiritual gifts by the apostle Paul. What he is saying here is so incredibly dynamic, yet the magnitude of it is often missed because we easily detach it from everything that was said just before. So in order to catch some momentum into the scope of what is being said, let’s take a quick glance at a few details from the previous verses.

In verse 3 we see the call to not think of ourselves more highly than we ought, but to think soberly, “according as God hath dealt to every man the measure of faith.” This begs a question… Why would God dealing (or distributing) a measure of faith to every man be the basis for having a sober mind and not regarding yourself in a proud way? The answer to this question, in many respects, holds the key to unlock the power in today’s verse! When we are given something special, we naturally compare it with what others have… “Do I have something better than they do?” However, this comparison shows that the paramount concern on our minds is largely self-concentrated, where our chief focus is on benefiting self. But in Romans 12 Paul warns against this, telling people to have the mindset that is in accordance with this fact: God has distributed to every one of His people the measure of faith! When it comes to spiritual matters (or in today’s case, spiritual gifts), our concern is not to be if “mine” is better than “theirs.” Our focus is to be one of faith, fully concentrating on the Giver of the gift, and what His intentions for that gift are. When Paul brings up the first spiritual gift in this passage, he says it is supposed to be exercised “in according to the proportion of faith.” And every gift that follows is to be exercised in the same way. Let’s read today’s verse again with this in mind:

“Or he that exhorteth, on exhortation: he that giveth, let him do it with simplicity; he that ruleth, with diligence; he that sheweth mercy, with cheerfulness.”

Did you notice that, with each gift’s instructions, there was not any other gifts mentioned? What each gift is called to do is completely focused on its own function, not trying to be “better” than the other gifts. Although competition is often what motivates us to accomplish something, the spiritual gauge for accomplishment is not us being “better” than others; a growing faith-connection with God is the thing that brings about the powerful and intended result of our gift. To get a clearer picture of what this means, let’s take a quick look at the various definitions of the spiritual gifts mentioned in today’s verse.

The first gift – exhortation – means “to call to one’s side” or “to speak to… which may be done in the way of exhortation, entreaty, comfort, instruction, etc.” This word does not simply mean exciting others about something, but one that calls out to another and extends what is needed at the time, whether that means exhorting, comforting, or instructing.

The next gift – giving – means “to impart.” Carrying this out is to be done “with simplicity.” That word “simplicity” is very interesting. A definition of the word says the following: “…the virtue of one who is free from pretense and hypocrisy… not self seeking, openness of heart manifesting itself by generosity.” It’s easiest to give something when we see that we will personally benefit by it. In other words, we use the “good deed” of giving to actually get. But the type of giving called for in Romans 12 must be done “with simplicity,” where a sincere heart openly extends generosity without seeking personal benefit.

The gift of ruling means “to set or place before,” and can involve being a protector or guardian. This gift is not a license to be bossy, but is actually a position of headship and responsibility, where the protection and wellbeing of others is put under their care. This is a position that must be carried out with diligence.

The gift of mercy can mean “to help one afflicted or seeking aid.” When we get down to it, this type of matter can be a downright drudgery. When we have a normal flow of how we want life to go, then somebody stumbles along our path with a legitimate need, we may help them out of a sense of obligation (since it is the right thing to do). But inwardly we may feel upset by the inconvenience. However, the act of helping somebody that is afflicted should not be done out of drudgery, but rather with cheerfulness.

In every gift that is named, it is never mentioned for the reason of display and fanfare. In fact quite the opposite. Each gift is not portrayed as a means of getting something, but rather giving something. Whether it be calling somebody alongside you for instruction or consolation, or extending generosity without self’s dividends in mind, or exercising protection over others, or extending aid to the afflicted, each gift is an avenue of giving. But giving from what source? We must remember, these are not natural gifts… They are spiritual gifts. When God gives these things to us, they do not become functions of our natural being to be exercised through our natural mind. Each one demands a living connection with God through faith: “according to the proportion of faith.” When God gives such gifts to us, we are not to look around and see if ours is better than everyone else’s. Each gifts source is found in God, and a reliance on Him through faith is demanded for the gift to be carried out to its complete design. We can’t really live out these gifts on our own because we were not created as generating sources from which continuous giving could flow. But when God gives one to us, whichever one it may be, it becomes a means for His Spirit to minister through our very lives.

So, in conclusion, as we think about spiritual gifts, and those that God has given to us specifically, let’s not fall into the paralyzing trap of comparison (and thereby grow “high minded”), but remember that God works through every one of His children by faith, and that a dependent focus and growing faith in Him is the key to living out the full and blessed extent of His glorious gift within us!

← Christ In Me
Authentic Love →