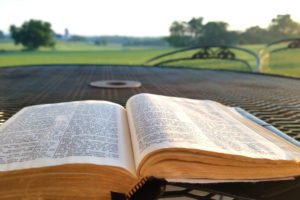 “Grace be to you, and peace, from God our Father, and from the Lord Jesus Christ.”

A man stops in his tracks to watch an ugly scene unfold before him. In the alley ahead, a band of ruthless thugs engage in beating a helpless victim to death. Oddly enough, instead of doing something about it, the man stands there indifferently. Watching.The crime happens on the whim of the murderers. No trial, no due process of law, no sentence. Was it an innocent victim? “Who cares” the man shrugs, “he was an annoying character anyway, so why not?”
—
Put yourself in the shoes of that cruelly apathetic onlooker. Regardless of how callused he might be, how would you describe the feelings that human soul might experience in the days, months and even years following the hideous event? Can a conscience be so seared as to never acknowledge the ever-present tug of guilt and shame from breaking God’s law by doing nothing when doing at least something was so desperately called for? Do not “be partaker of other men’s sins” (I Timothy 5:22).

And the compunction of regret would only worsen if, over time, the onlooker found himself drawn by the schoolmaster of the law to the standard of love and integrity central to Christianity and Biblical living. What amount of sincerity could outweigh the ever-present weight of guilt inextricably tied to intentional negligence?

Guilt. An emotion we have all felt, to one degree or another, because we have all intentionally sinned.

I look back on the situation with regret…a friend encouraged me to get involved with a business venture he was finding to be very successful. It sounded too good to be true and there was a check in my spirit, but even after asking a lot of questions and looking into it as deeply as I thought necessary, I couldn’t intellectually determine what was wrong with it. Just about everyone I talked to thought it sounded like a good idea too. Except for one person. Though they couldn’t explain why, they cautioned me about getting involved. Without an good, intellectual reason, why not? Business is business. So I intentionally moved forward with it, convinced that I was just misinterpreting my conscience.

More than a year passed. It was behind me.

It’s not a good thing when you get a personal letter from the Director of Compliance from a multi-billion dollar company. They considered one of the integral aspects of the little business venture I had got myself into to be a breach of contract. And there would be consequences.

And there were consequences.

But physical consequences were bearable compared to the guilt I felt for ignoring that initial check in my spirit. Why did I not listen to God’s still, small voice? Can a conscience be so seared as to so easily explain away the promptings of the Holy Spirit? What amount of sincerity on my part would ever outweigh the ever-present consciousness of my own hypocrisy?

None. I can not get rid of it. It would linger to haunt me till the day I die. As life goes on with sin ever present, guilt stacks up and depression sets in. Have you not felt this? O wretched man that I am! Who shall deliver me from the body of this death?!

There is something I am very grateful for, though. Something called “grace”. Through God’s grace, this dreadful cycle does not have to continue forever.

O how I thank God through Jesus Christ my Lord, that there is no condemnation to them which are in Christ Jesus. The law of the Spirit of life in Christ Jesus hath made me free from the law of sin and death. What the law could not do, in that it was weak through the flesh, God sending His own Son in the likeness of sinful flesh, and for sin, condemned sin in the flesh. He has borne our griefs and carried our sorrows. He was wounded for our transgressions. God laid on Him the iniquity of us all. When we sin, we have an advocate with the Father, Jesus Christ the righteous so that now, with Christ in me, my body is dead because of sin, but my Spirit is alive because of His righteousness.

God’s grace is the only hope for the sinner. It is by grace that we are saved. No amount of penitence paid by my own effort could ever clear away the guilt that weighed on my heart. And then God, through that grace, can actually work all things together for His good to those who love Him. Yes, all things, even the sin of the past.
—
Perhaps this is what Paul was thinking when he opened his letter to the saints in Ephesus with “Grace be to you, and peace, from God our Father, and from the Lord Jesus Christ.” His consent at Steven’s martyrdom I’m sure was something he often looked back on with regret.

But when his sin was ever before him, he could trust that God’s grace would be sufficient for him. He couldn’t change his past, but God’ grace was in it’s place. Without it, his conscience would give him no peace. With it, peace could not be absent from his conscience!

And thus, Paul opens his letter with “grace and peace” as a reminder to himself, to me, and to all who would read it, that Christ Jesus came into the world to save sinners, of which he was chief.

← God's Will For Us
God's Well Speaking Of Us →