The verse highlighted in this post is from the first section of our Investing Challenge.

A farmer went out to his freshly plowed field one quiet, spring morning with a satchel full of seed wheat…

…As he walked into the field, he firmly tied the heavy sack and slung it over his shoulder to let it hang at his side. As the sweat began to form on  his forehead, he surveyed his large plot of land. He took a deep breathe, dug his hand into the rustling kernels and began casting the seed in fanning arches onto the newly turned soil. 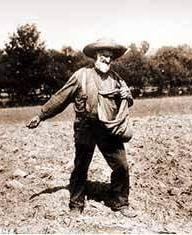 He worked his way steadily across his field, casting his precious cargo before him. At the same moment, a city dweller passed by the place, and seeing the farmer, ran to him with a look of terror on his face. This young man was born and raised in the bustle and sophistication of city life, having no real knowledge of the normal doings of common workers. But he quickly took in the situation and felt it was his duty to help this poor, misguided farmer. “What are you doing!?” He shouted to the farmer as he came, “You’re throwing away all that good grain, are you mad? You will never get this grain back. Don’t you need that food to feed your family?” He studied the old farmer. “Look at you,” he continued, pointing to the threadbare elbows of the farmer’s faded work shirt, “You’re poor enough as it is. Keep that grain for yourself, it will do you far more good in your mouth than in the ground! Stop throwing away your only resource.”
The farmer had stopped and now looked up from his work. He gave a quick nod, smiled broadly at the well-meaning stranger and softly replied, “It’ll be alright lad, thanks just the same.”
The young newcomer stood in dumb astonishment as he watched this demented fellow begin once again to cast his most precious substance into the earth.

“Sow to yourselves in righteousness, reap in mercy.”
Hosea 10:12a

First off, whose righteousness? In the next part of the verse we see that God is willing to impart his righteousness on us, which is a really good thing (remember that our righteousness is like filthy rags.) so we are to sow in the righteousness of our Lord, that means we invest in what Christ invested in: Souls and the Kingdom of God.
We are to invest, just like a farmer “invests” grain by putting his seed in the ground. But here’s the miracle, that farmer will never see that seed again. Never. It’s gone. But in “exchange” for that seed, he receives a tiny plant which in turn grows until it bears a multitude of seeds of its own. In the long run this brave farmer is graciously rewarded for his actions.

He receives more than he ever had. Imagine a farmer who never planted his seed for fear of losing it all. In a sense, someone like that already has.
We are to give up the things in life that won’t last in “exchange” for treasures that will last eternally. Our God asks us to “invest” ourselves in His great cause.

And God promises to provide. I love the passage in Malachi 3 that says:

“Bring ye all the tithes into the storehouse, that there may be meat in mine house, and prove me now herewith, saith the LORD of hosts, if I will not open you the windows of heaven, and pour you out a blessing, that there shall not be room enough to receive it.” (Emphasis added)

God has blessed us all in so many ways, He asks us to give back to Him. But why? It’s not like God needs our money; He doesn’t. So why ask us to give?