One day I was talking to someone, and the verse in Matthew 11 came up where Jesus says “…learn of me; for I am meek and lowly in heart:”. I 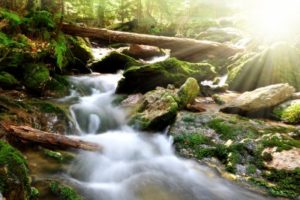 realized that that was the answer to my question. I definitely knew the verse, but for some reason I had never made the connection.

It hit me of the meekness Christ displayed on the cross, and on His way to it.

Think of it. Just as He’d spoken the world and universe into existence, so He could have also merely spoken the command, and utterly wiped out all humanity. Or, had He presented an argument at the trial, it would have been the most solid and well presented legal defence in all history. But, the Son of God, Creator of all, and greatest Conqueror did none of these things. Instead, in His innocence, going to the cross, to pay the penalty of our absolute guilt. To raise, on OUR behalf, the greatest defence of all eternity, before the throne of God.

I think the reason this struck me so much was because, few things help me lose focus on others and their needs, like getting caught up in my own sense of personal injustice. And here, the King of Kings looks past His own agonizing hurt and injustice, and sees our need for forgiveness of sins, and deliverance from sin.

Ephesians 4:3 goes on to say “Endeavouring to keep the unity of the Spirit in the bond of peace.” Meekness has a powerful effect on establishing unity and harmony in relationships. And often, bitter conflicts can be resolved when, by God’s grace, a spirit of meekness is brought into the situation; even if just by one person.

At least for me, it’s all a daily battle. None of it comes naturally, that’s for sure 🙂

But then, it all comes back to memorizing and meditating on God’s word.

While I am not, He IS able to work the transformation.