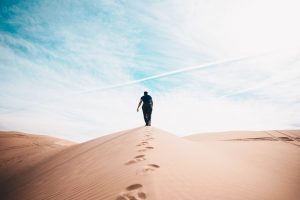 “Wherefore I also, after I heard of your faith in the Lord Jesus, and love for all the saints….”

Ok, I know it’s random, but let’s have a little history/geography lesson. (You won’t be able to say the Journey challenge wasn’t educational. 😊)

A lot of Bible scholars believe that Paul wrote this letter to the Ephesians while he was locked up in Rome for his heinous crime of preaching redemption, grace, and the power and forgiveness of Christ. (A bad egg, that Paul!)

So, Ephesus is roughly 1,230 miles from Rome, depending on the route. Ok, ok, so now-a-days that doesn’t sound like much. I mean if we flew, it would be like 4 hours and 25 minutes, and might cost us $200 or $300. Even if we drove, it would only take us about 28 hours, so maybe a two or three-day trip. But for historical context we have to dial back for a minute. There weren’t cars or planes. . . or even bicycles back then (a bike, by the way, is not available for this route according to Google Maps, just in case you were wondering). We’re talking donkeys, sketchy ships that sink in storms and shipwreck you on islands where you just might get bitten by a poisonous snake, not die, and be worshipped as a god. Oh, and walking, lots of walking.

To make this trip on foot, with a little help from a ship here and there, it could take you a full month of walking 12 hours every day to get from Ephesus to Rome.

I think that’s really cool. And this is why I think it’s cool: somehow, even over that distance, Paul heard about the faith and love of the Ephesian Christians.

See, I guess what struck me about this verse, was the fact that the Christians in Ephesus must have had some kind of reputation, because why else would word have made it all that way to Paul’s ears in Rome? It’s not like Timothy sent a quick text message, “Say Paul, Ephesian Christians are doing pretty good! Lots of faith and love around here!” There wasn’t any snapchat or Instagram posts with group hug pictures to keep Paul updated on the love levels of the church. They didn’t even have snail mail as “fast” as ours! (Yes, USPS included!)

The Christians at Ephesus were the real deal! They had faith in Christ, and you could tell because they had a love for all the saints. It reminded me of the verses in John 13 where Jesus said: “A new commandment I give to you, That you love one another; as I have loved you, that you also love one another. By this shall all men know that you are My disciples, if you have love one to another.” (John 13:34-35) (Emphasis added)

The Ephesians were pretty much fulfilling those verses, to such a degree that Paul heard about it!

Now, at this point, I tend to start bemoaning my bad Christian-ness. Wishing that if I were just better like the Ephesians, then I too might have the kind of faith and love that gets reported to others and honors Jesus. But honestly, that kind of pity party is a waste of time. Like I said, the church at Ephesus was the real deal, so real, that they had weaknesses and failures too. They needed teaching, exhortation, and growth. They needed to be told that kids should obey their parents, husbands should love their wives, wives should submit to their husbands, and servants should obey their masters. They needed to be told about the armor of God, prayer, and spiritual warfare. They were normal weak people like us.

So how did they get to the place of faith in Jesus and love to others that was worth talking about?

I think maybe they turned their minds and their hearts to all the truths they were being taught about Christ, letting their faith grow through what they heard. I wonder if when some of them would get off track and lose sight of the truth, maybe others kind of yelled at them, just a bit, to get them focused on Jesus again. I don’t know for sure, but however they did it, they lived in faith, believing the truth about Jesus, and the result of that faith was love for all the saints.

In some ways, it’s not much of a wonder really. I mean, just think about all the things Paul was talking about before this verse: think about the kind of love he was describing:

A love that chooses and accepts us

A love that blesses us with every spiritual blessing, and speaks well of us, like Becky talked about

A love that forgives

A love that abundantly gives us prudence and wisdom

A love that’s rich in grace

If we took a chill pill every once in a crazy busy while, and just gave a good thought to all that these verses are saying, man! Our minds would be exploding regularly with awe at all our God has done for us. That kind of thinking feeds our faith, and that faith results in listening to Jesus and obeying Him; and obedience to Jesus looks like loving one another.

So maybe that’s how the church at Ephesus did it.

Simple faith in Christ – believing what He says, making His words, His ways, and Himself the focus; the thing I’m always going back to, the One I’m always singing about, excited about, and amazed at. When I’m living like that, He kind of rubs off on me, and then, and only then, I can ‘love another as He has loved me,’ with the kind of love Paul was speaking of.

In our day and age, we get to see this kind of love every once in a while, and it’s pretty breathtaking. If we saw it more often I think our families, churches, neighborhoods, states, and entire country would be way different.
My problem is, I think I get this all backwards. I start out feeling like I have to love people to prove I’m a follower of Christ. So I force myself to be nice to people. I serve (well sometimes), I’m polite, I try to be really patient even with people that drive everyone crazy, because I know I’m supposed to “love”. But really, I’m not doing it for the person, I’m doing it for myself, because I want to be a “good Christian”.

The love Christ has given me isn’t like that at all. We’ve seen that it’s a love that gives genuinely, sincerely, and for the good of the other person. Otherwise it isn’t real love.

I think the world around us, and especially the body of Christ, has had enough of the “good Christian” kind of love that’s so common. The cold, sterile, safe, clean, veneered, pretending, kind of love that dominates our lives. I think what we need are some Ephesian believers, who take the incredible things that God has done, and hang onto them, focus on them, praise the One who gives so lavishly, trust the One who forgives so extravagantly.
And as a result of that brand of faith, they’ll have the same heart towards others that their Father has towards them: one of real, honest love, the “I- genuinely-care-about-that-person-and-want-their-good-even-if-they’re-frustrating-hurtful-and-undeserving” kind of love.

When that type of faith and love starts popping up, people will hear about it. It’ll make its way through the grapevine. Even if it takes a donkey, a Roman carrier pigeon, a ship, or a month-long walk, word will get around, and people will thank God for those folks, just like Paul did.

← The Leading Of The Holy Spirit
Thanksgiving and Prayer →