Confessions of the Reluctantly Rich

The verse highlighted in this post is the part of the first section of our Investing Challenge.

In I Timothy 6:17 Paul writes, “Charge them that are rich in this world, that they be not high minded…”

Ok, I know what you’re thinking at this point– am I rich? Now don’t give me the spiritual answer about true riches. I mean rich in the good old fashioned sense of cash and assets. If you’re like me, then you are probably laughing right now as you think, “Yeah right! I wish.”

We all know that rich implies that you make at least a six figure income, own at least one big home, drive new cars and go to exotic places for your vacations, right? In my wildest dreams, neither myself nor my family has ever lived that way; so you’re probably thinking– no, I’m definitely not rich. Until a few years ago, this would have been my opinion as well– and was I ever glad! The Bible has a whole list of warnings for the rich that I never wanted to be a part of:

Yikes! I definitely wanted nothing to do with wealth–at least not in the Biblical sense!

A few years ago, I read The Hole in Our Gospel, written by Richard Stearns, the new president of World Vision, and everything I thought about wealth and riches changed. In his book, he gives many current world poverty statistics. Here are just a few of those perspective-altering statistics:

This last statistic hit the closest to home. At the time I was reading the book, I was making, in one hour, well over what more than 80% of the world’s population makes in one day. I may be home-educated, but even I know what that means. By global standards, I am very wealthy.

This was not welcome news. I had never wanted to be rich, precisely because I knew that “to whom much has been given, much more shall be

required” and I was already having trouble with the “non-rich” list of expectations. I briefly contemplated trying to escape my “wealthy status” by quitting my job and going home to eat potato chips on my parents’ couch; then I realized that the fact that I had a house to go home to—not to mention a couch and potato chips—still placed me well above the majority of the world’s living standards. Alas, I realized there was no escape. I was stuck in the upper crust of the world’s population. Now the only question was what to do about it.

Initially, I was a little upset that no one (I suppose meaning, the “American Church”) had ever told me that I was the one Jesus was talking to when He said things like, “…Woe unto you that are rich! For ye have received your consolation.” (Luke 6:24) and the infamous, “…Verily I say unto you, That a rich man shall hardly enter into the kingdom of heaven.” and in case you didn’t hear it the first time, “…again I say unto you, It is easier for a camel to go through the eye of a needle, than for a rich man to enter into the kingdom of God.” ( 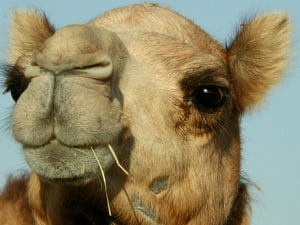 Matt. 19:23-24) Yes, I was a little frustrated that I had been kept in the dark about my financial status. However, when I made an honest evaluation of the list of warnings to the wealthy as listed above, it made a lot of sense to me. I had struggled with many of those curses throughout my life and had often wondered why. Now I knew, it was the price of living in wealthy, blessed America. My eyes are now opened and I hope that if you have never considered your privileged status in the world before, that you will take a good hard look at the facts. Maybe, you too will find that living as a member of the top 20% of the world’s richest population should have some bearing on your spiritual and monetary conduct.

Although I have spent most of my life breezing through the many verses in the Bible addressed to the wealthy, I know generally that God has a lot to say about personal wealth– both about the risks as well as the responsibilities. Here, I have tried to bring a few of these down to practical application, using I Timothy 6:17-19 and the acronym RICH (just so you don’t forget it).

← Another Year!!!!!
Photos from the December Philippines Journey →